All throughout last week I was searching through cyber-space for my past blog entry which told the story of my first encounter in Bukit Merah. I know I had taken part in a tri here before, but what distance, which year, I really could not remember, until I finally found it, my blog post entitled Red Hill Biathlon & Triathlon. Year 2007, it was, and I was a wee 21 year old, still holding on to my baby chubs, as you can see from the photos then. I’ll put one here for you. Don’t laugh. :) 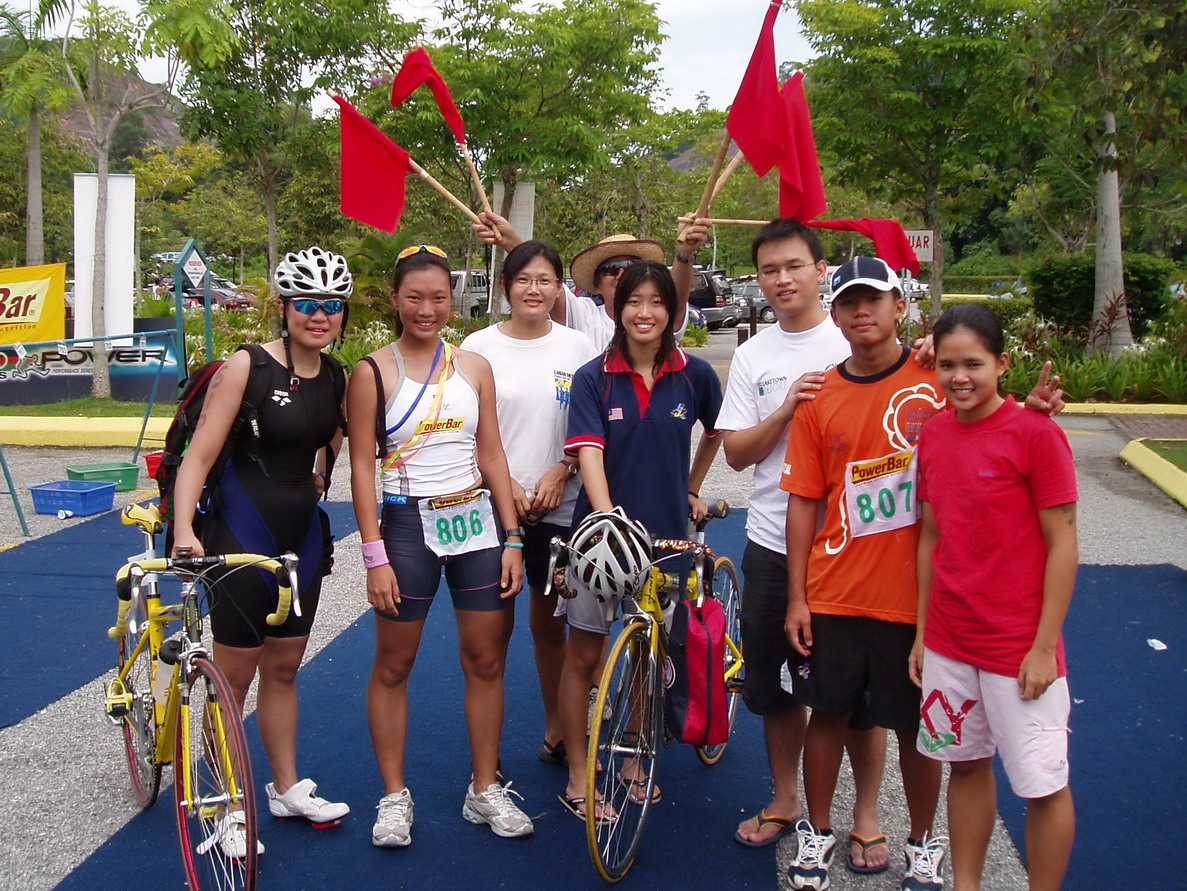 In the comments on that post, I think I made several promises to my friends to do a full Olympic Distance Tri someday. So 8 years later, I returned to Bukit Merah, not to do an OD, but in fact to do my 4th 113km (or 70.3 mile) triathlon. It’s pretty cool when I think about it. =)

I’d be lying if I said I didn’t expect much out of this, because I have been working pretty hard on my bike, and I know that my run has improved too. But I dared not say it aloud because expectations are killjoys, and I was much happier not expecting anything and treating this as just another triathlon training session for the Ironman. I had my big brother Kevin with me at this race, and that’s always a nice change. My brother is a bit of a superstar in the tri arena, and I always feel proud to be walking next to him. :)

Got there after lunch in Taiping, checked in, and my brother said “Let’s go try out the route a little bit”. Everyone I met along the way had mentioned about the BIG HILL just outside. So Gary, my brother and myself hopped on our bikes and went to check it out. They weren’t kidding. 22% incline, about 2 km up and another 2 km down. And we had to do this 4 times. I laughed for lack of anything else to say because the next day was going to be EPIC.

Sunday morning, I got up at 5 to get ready. I was feeling okay, slightly nervous but mostly calm. I kept telling myself to treat it as training, and to just do my best, because, that’s what it should be. If I did better than expected, then it is a bonus and a testament to my training. The race started late (again), and it was a mass start. I stayed behind and swam my breaststroke comfortably, trying not to kick anyone (too hard). I had a pretty dreamy swim though. My head was filled with thoughts, and I constantly found myself thinking of work, thinking of wedding plans, thinking of so many other things BUT the fact that I am actually racing! So I knew that I wasn’t clocking on PBs on this swim, and when I finally came out of the water I checked my watch and realised I did about 51 minutes. Oh well. It’s just training. I heard Kanan, the MC saying “First female youth out of the water!” And I went, “wait..whaaaaat?”

Photo courtesy of SeanWorld Of Marathon

Ran to the transition area and wiped my face, squirt some water, wore my gloves, socks, shoes, helmet and stuffed all the gels into my pockets. I came out of the water with a few others, one of them even thanked me for swimming breaststroke as he had used me to navigate. I was trying to go out on the bike as fast as I could because I knew that all these guys will be passing by me in less than 20 minutes.

Hopped onto my bike and braced myself for the first climb. Andrew said to me, try moving zigzag to tackle the hill. Okay! So I zigzagged my way up the incline, and to my surprise it felt much more doable now. On the downhill, my fingers were held firmly on the brakes. Once we got to the bottom, it was a long straightforward route with gentle rolling hills. And though this might favour most people, I personally find routes like this to my disadvantage. I am not a fast cyclist, but I have the mental strength to push myself up any hill you throw at me. So I lose out on a flat terrain because I ride on average 27-28kph only (though its a huge improvement from my 23-24kph 6 months ago). I saw my brother at the side, and I had a sinking feeling he had pulled out of the race. He assured me he was okay though, so I had to wait till later to ask what happened. Anyway, as predicted, many people called out my name and zoomed past me and I just smiled. “Just enjoy the race, Karen” was all I could say in my thoughts. The bike route made us go through that insane hill another 3 more times, and I saw many hop off their bikes to push them up. I refused to. I stayed on my saddle all the time, and made it into Transition2 quite happily. The bike course was a little short – 85 km. But I guess what it lacked in distance was completely made up by that crazy hill x 4! I clocked 3:29, definitely a PB for me! :)

Off the bike, and saw my parents. Changed to my shoes, grabbed my visor, and off I went. I started my run pretty strong. I was feeling great, doing a 5:30 pace! It wasn’t long till I saw my brother running and he did a u-turn and ran alongside me. Although I was happy to run with him, immediately I felt a slight increase in intensity. But still manageable. Gary joined us for a bit, but soon he stopped to take photos of our friends, while my brother continued to run with me. At one point, I noticed our pace was 5:17! Okay, time to bring it down a notch. After 1 loop, he was done and I went on the second loop solo. I kept my pace to the best I could. I saw Gary again and he was my motivator. I ran steadily, even though my pace had gone down to 5:59. As long as I could keep it under 6!

I finally crossed the finish line in 6 hours 34 minutes! I saw Nik poised at the Finish at his camera and I made one giant leap of joy to cap it off! Happy, I am. :) What made it more awesome, was totally winning it! 1st place baby! Haha, to be honest, my esteemed competitors were all not present, and there were only 5 participants in my age group. But a win is a win, and I’ll take it any time. :)

Now, I’ve only got Kuala Terengganu Marathon, Port Dickson Triathlon and Melaka Century ride coming up. And then, in only 66 days from now #imgonnabeanironman.

Would like to thank my family, mom & dad and brother and Gary for their love and support! Thanks also to N8Endurance by Egonutrition for the race nutrition and gels, Compressport Malaysia for the awesome candy coloured calf sleeves, RSH Malaysia for the Saucony Isofit Zealot (best tri running shoes ever!), LifelineID for the peace of mind (especially in such crazy terrains), J Cycles Garage for the carbon wheels which helped me fly and all friends and supporters present! You guys rock!